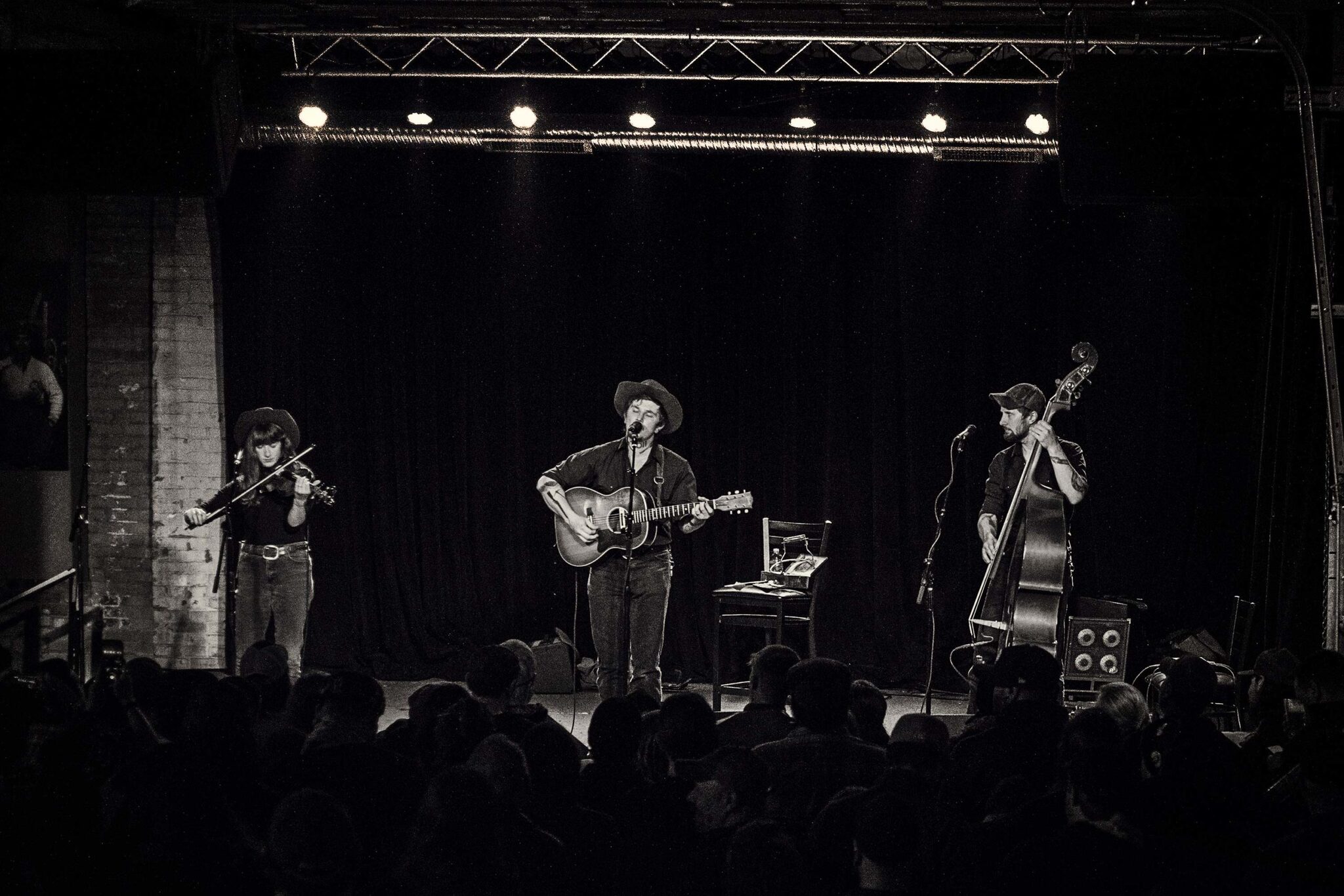 Returning to the stripped -back, string band sound of their busking years, Lost Dog Street Band’s new album Glory is a searing testament to recovery,redemption and resolve. Fronted by song writer Benjamin Tod and his wife, fiddler Ashley Mae, the DIY band began out of desperation on the sidewalks of Nashville roughly a decade ago, but now sustains a significant national audience that’s drawn to their authentic songwriting, old-time instrumentation and hard-won independence.

“I wanted to make an album with the specific intention of being raw but full at the same time and to get back to our roots,” Benjamin Tod says.“ Everyone on this album has been a busker.Douglas Francisco, who plays slide guitar — I met him on the streets busking. Jeff Loops, our bassist, was in a busking band, too. That flavor was important to me, jusgetting back to the root of things.”

By centering the songs of Glory around acoustic arrangements, without the drums or steel guitar of prior albums, these harrowing personal stori es become even more graphic. It’s a feeling that Benjamin Tod himself describes as “a logical glimpse of climbing out of hell. ” He observes, “ Something that was shocking to me was realizing that as soon as I got sober, that was really the beginning of the journey. Choosing to get sober was barely even a milestone.”

Leading the album, “Until I Recoup (GloryI)” vengefully demands justice and describes the fight for glory after it ’s been unjustly taken away. The lyrics read like a mission statement of redemption

Similar to Steve Earle’s influential Train a Comin’album from 1999, Glory conveys the hard work that goes into getting clean, particularly in tracks like “Fighting Like Hell to Be Free,”“Beautiful Curse” and “ Jalisco Bloom.” Calling to mind the skillful writing of Guy Clark or Townes Van Zandt, “ What Keeps Me Up Now ” views that phrase from multiple angles, from sleepless nights to a suicide attempt, where “ the belt was a noose when I camem to on the ground. It’s one example of the “ dark country ” description that the band occasionally uses to describe their sound.In contrast, “End With You” finds Benjamin Tod feeling damn glad that he’s found a relationship that’s sustained him for a decade, through the achievements as well as the obstacles

Raised in Sumner County, just outside of Nashville, Benjamin Tod was primarily raised by his grandmother and grandfather. However, at age 7, his mother surprised him with a cheap electric guitar–then his competing father bought him a pawnshop classical guitar. With nobody toshow him how to play, they were little more than toys. However, at 14, he and a friend each received a Fullerton parlor guitar from his friend’s father. The boys started getting interested in folk music and protest songs, which led Benjamin to the streets of Nashville to busk

Meanwhile, Ashley Mae was spending more and more time in Nashville, where her mother worked the overnight shift at rock station WK DF. She’d already tapped into the small punk scene in Rapid City, South Dakota, where she grew up, but found an even deeper community in Music City. At 20, she taught herself to play fiddle, shedding as much of her classical violin training as she could. When she met Benjamin Tod at a punk show, introduced by a mutual friend, they bonded immediately.

At 17, they left Nashville together for a life of street performance, hopping trains, and scraping by on less than $300 a month. After four years of terrible gigs and almost no traction, Benjamin Tod decided in 2016 to abandon the band. “I’d been a hardly functioning drug addict and alcoholic for over a decade. I was sick of the lifestyle and it seemed like it was going nowhere,he admits.

Lost Dog Street Band gained traction through that tour, but when Benjamin Tod and Ashley Mae separated for a year and a half, the momentum evaporated. Instead of going back on the road, they filmed performance videos of songs from Benjamin Tod’s solo album, I Will Rise, and posted them to YouTube without much expectation other than promotional use. However, that decision proved to be the turning point, as curious listeners discovered the band and their ticket sales skyrocketed.

Those early fans especially will embrace the spare but spirited sound of Glory , applied to tracks like“ Cost of the High,” which directly addresses the fallout of addiction, as well as “Hayden’s Lament,” where the choice is given between“ getting dead or getting tough.” Right after the plaintive country ballad, “ Losing Again,” Benjamin Tod brings out the banjo for “ I Believe (GloryII),” which basks in the emotion of finally finding that glory

Without touring in 2020, Benjamin Tod and Ashley Mae settled on a parcel of land in rural Kentucky that they bulldozed themselves, building a cabin with well water and solar panels.Every week, even now, Benjamin Tod says he takes account of his situation as a
recovering addict